Try a simple experiment: Dip a wand in pure water instead of in your soap bubble liquid and try to make a bubble. You will not succeed in making bubbles, contrary to when using a mixture of water and soap. This experiment illustrates two things

A film of pure water

To explain the influence of gravity on liquid films, imagine a vertical film of water as illustrated below. Gravity pulls the water downwards making it thicker in the bottom and thinner at the top. Such a thickness gradient will develop on a time-scale of seconds. 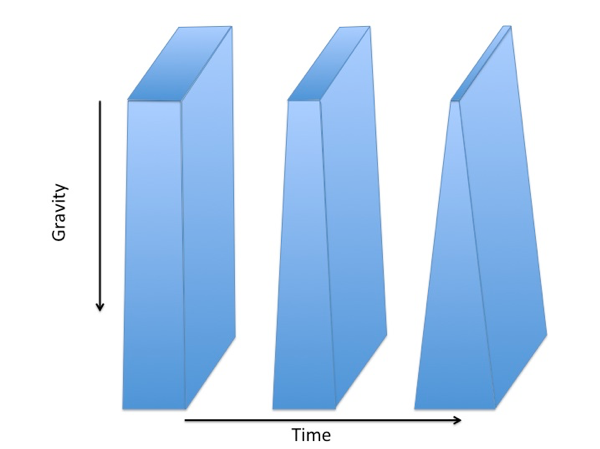 The figure illustrates that a vertical liquid film over time changes its thickness. Over time the film becomes thinner in the top and thicker in the bottom due to the downward pull of gravity.

Soap molecules are quite special by having a non-polar tail that does not mix well with water. To minimize the mixture with water the soap is therefore mainly located at the surfaces of the liquid (This is true as a first approximation, but the structure of a soap film may be much more complicated). One part of the soap molecule is however attracted to water. This is a negatively charged part of the molecule, which makes mixture of water and soap possible (unlike water and oil). See more about soap molecules here.

A liquid film made from water plus soap is also thinned by gravity in the top region, but the surfaces in thin regions will repel each other due the negative charges of the soap molecules (illustrated below). A soap film is therefore thinned down to the thickness where the surfaces start to “feel” the repulsive force between them. If the repulsive force is strong enough to overcome both the attractive forces from the surface water molecules and the pull from gravity, the soap film will be stable. 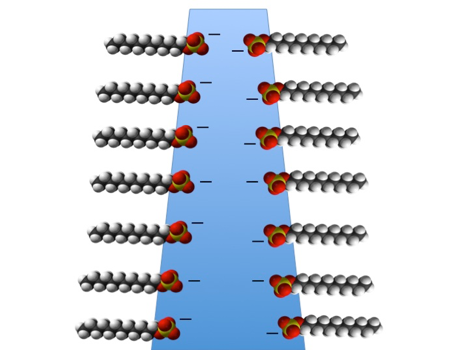 A simplified structure of a vertical soap film. A layer of electrically negative charge is associated with both surfaces. The negative charged surfaces repel each other and thereby resist a full collapse of the film.

Ignoring gravity, the forces acting across a soap film are described mathematically by the so-called DLVO theory (named after Derjaguin and Landau, Verwey and Overbeek). The figure below shows graphs according to the DLVO theory of the so-called potentials for a liquid thin film.

The black line represents the potential describing the attractive and repulsive forces acting across the soap film. You can thick of such a graph of potentials as if the attractive forces are pulling the line down and the repulsive forces are pulling the line up. This means that one has to apply force to move upward in the plot, while movements downward can happens spontaneously. Similar to when walking in a landscape with hills and valleys where you have to use force to go up on a hills, while you can, at least in principle, roll or fall down into a valley without using force. 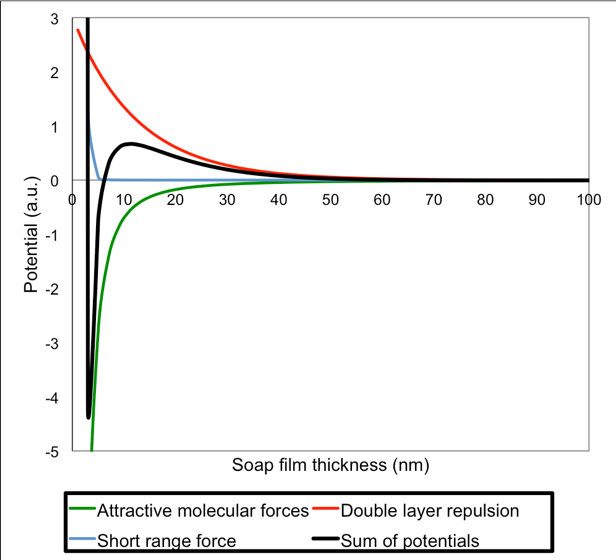 Potentials for attractive and repulsive forces as a function of thickness of a soap film as described by the DLVO theory.
Imagine a soap film that is at first thick, maybe a micron or so, but over time is thinned by gravity.

The graph shows what will happen when the soap film becomes really thin: When the thickness reaches ca. 50 nm the potential becomes positive. This means that repulsive forces start to dominate. If the repulsive forces are stronger than the pull from gravity, the thinning of the soap film will stop. The soap film is at this point a so-called Common black film. It is too thin to show interference colors and therefore appear black on a black background. The soap film is, however, not fully stable and further thinning may happen, for example by evaporation of water. When the soap film gets thinner the potential reaches a maximum (on the graph this is at a thickness of ca. 10 nm). After this it drops rapidly, it reaches a minimum (at ca. 5 nm) and increases very rapidly (at ca. 4 nm). This means that the attractive force dominates for some thicknesses below the common black film until reaching a new stable thickness. This is the so-called Newton black film. Notice, that the mentioned numbers are realistic for a soap film, but variations are reported for the thicknesses of a common black film (5-200 nm) and a Newton black film (3-5 nm).

Two things might be worth mentioning at the end: Firstly, although the potential increases towards infinity in the graph, this does not mean that a Newton black film is fully stable. It just means that additional forces will rather break it than thinning it further. Secondly, the soap bubble liquid we typically use for making soap bubbles contains a relatively large amount of soap molecule beside glycerin and other additional molecules. The structure of soap films from such mixtures will be more complicated, for example with extra soap micelles and bilayers. These additional structural features likely influence the thickness dependent potentials so that there are more hills and valleys in the graph, which means that there are more metastable thicknesses of the soap film.

You can read more in scientific papers, for example:

or in books, for example: